Tallinn European School, as part of the network of European Schools, wants to prepare its students for their future. The future starts now and one of the core ingredients of our future is learning and sharing based on a common set of values. Today, we would like to share with you the experience and plans of Sandor Franch, who is currently in Secondary 7 and in the process to get ready for his next chapter in life. 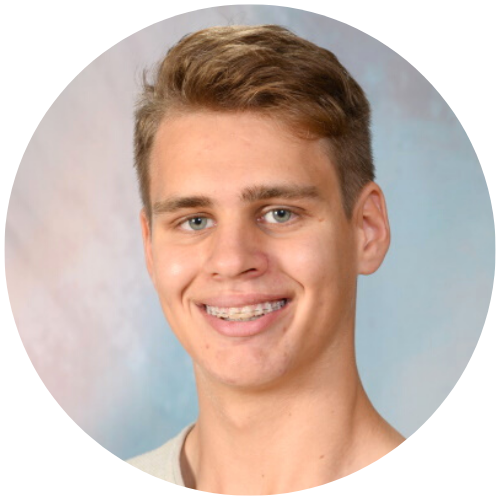 Sandor, tell us a little bit about you.

I am an 18-year-old Estonian-American who speaks four languages (English, Estonian, French, and Spanish). I also play the guitar and compete at soccer on a very high level. I’ve lived in Luxembourg and Eritrea, as well as Estonia, and have travelled to more than 30 countries on four continents. Having been to so many countries, I am comfortable in most settings and easily adapt to my surroundings. I always try to see multiple sides of situations. Very few things are black and white.

There are several international schools in Tallinn. Why did you choose to attend TES?

TES offers a classical education where languages are taught at a very high level and subjects such as philosophy and economics are possible. As a humanities-minded student who was already bilingual, the chance to get a high level of skills in French (B2/C1) and Spanish (B1/B2), as well as study subjects such as geography and history in French, interested me.

What are your plans after you will graduate from TES this summer?

I will attend Washington and Lee University, which is located in Virginia in the United States. I will also be a member of their soccer team. I intend to study Behavioral Psychology and Law, Justice, and Society. (Ed. Note: Washington & Lee has been ranked No. 9 Best National Liberal Arts Colleges 2021 in the US by USNews)

There were two key elements to my acceptance to such a school. First was the Head Soccer Coach being interested in me as a player. More importantly, was my academic transcripts/grades. Thanks to TES’s rigorous curriculum, where along with learning two foreign languages, I also learned to become an analytical writer and think/work independently, my transcripts easily passed Washington and Lee’s demanding standards. I was also accepted at Emory University and was being considered for Dartmouth College, but Washington and Lee was the first school to guarantee me a spot on the soccer team.

Why did you choose a program in the US and not in Europe?

The US is one of the only countries where it is possible to combine studies with sports. The country also has some of the best universities in the world, especially where diversity, academics, and extra-curriculars go hand-in-hand.

How did TES prepare you for your university life in terms of both subjects you studied and the application process in general?

The school offers a variety of subjects at different levels starting at S4. For example, strong math students can take 6 periods of math per week, while weaker math students can take 4 periods/week. It is the same for almost all subjects. That helps students focus on what they are good at while still getting a solid education in the subjects they do not like so much.

Regarding the application process, the biggest help came from my counsellor in coordination with TES. He helped me set my sites higher regarding which universities to apply to. He was then relentless in pushing me to edit, re-edit, and edit my personal essays a few more times because these are key to a student’s application. I can say without hesitation that I wouldn’t have gotten into Washington and Lee without his guidance.

In hindsight, what would you have done differently two years ago at TES compared to what you know today?

I would have taken my subjects much more seriously in S4 and S5 because the emphasis on past grades is very important in the college application process. Also, considering that I was focused on studying in the US, I would have spent more time and focus preparing for the SATs.

How important were subject choices for you in S6, S7? What were your favourite subjects and why?

Subject choices are extremely important. The grades during the BAC years are very important when it comes to submitting your transcripts/gpa to schools. Selecting those subjects and levels (advanced or regular) is no time to be risky. Play it safe and select the subjects you enjoy and can excel at. This will help you enjoy your school days more. And it will help your GPA.

For our current secondary students, what is your advice?

For S1 to S3, the most important is getting familiar with how different secondary is to primary. Focus more on learning independence, organization, and time management. Getting work turned in on time is essential. Don’t complain or make excuses. Take things as they come and look at each success and setback as a learning experience.

For S4 to S7, grades matter as they will be part of the transcripts that universities ask for. It is better to show continuous growth throughout those last four years rather than start out strong in S4 and S5 and get worse marks in S6 and S7.

The students and teachers were very open and supportive towards new students, even those from different backgrounds. I came in S4 and easily integrated and was immediately accepted by my classmates. Having been in two international schools and one other European school, I can say that I had never felt that before here.

One thing I didn’t like was that there were some very long school days for students. Some days started at 08:15 and ended at 17:00. That was difficult, especially for those who are involved in activities outside of the school.

If you come back in ten years to TES, what would you like to see?

Bigger and better facilities, particularly the gym and lab. The facilities now are much better than what we had in Ülemiste, so I would like the school to build on that. I would also like to see the number of students grow but not too much because then the school might lose the personal touch it has now. Most importantly, I hope there will be teachers who can specialize in their subject, especially in the sciences and maths. Right now, teachers are covering multiple subjects, and that is very demanding for them.

Thank you, Sandor, for your time. We wish you the best of luck for your future and are keen to see you coming back at someday to TES reporting on your experiences.

We have received your application. Thank you!